The Curious Case of the White Star Line Steamer

The first reporting as to how Florence met James Maybrick was on 20 May 1889.  According to the London Evening News of 20 May 1889, attributed to its Liverpool correspondent, writing on 19 May 1889:

'Mr Maybrick and she [Florence] met on board an Atlantic steamship going to America, and a short acquaintance ripened into love...'

A similar story featured in the Cardiff Times on the same day which said as follows:

'The couple met on board an Atlantic steamer coming from New York about six years ago, and it is said they were married a fortnight afterwards.'

The Liverpool Daily Post of 21 May 1889, not apparently aware of the meeting on the steamer, said:

'It is stated that the deceased first became acquainted with his wife during a visit to America on business'.

On 30 May 1889, the Liverpool Daily Post, now aware of a meeting at sea, added some more information:

'We understand that it was Major Hazzard, of New Orleans (now a full general), who introduced Mrs Maybrick (then Miss Chantler (sic), daughter of a Mobile banker) to her future husband on board a Transatlantic vessel.'

Responding to the story which had circulated ten days earlier, The Liverpool Daily Post story continued:

'But it is not true that they were married in a fortnight after, and even at the risk of destroying the romance it must be stated that they waited a much  longer period before the happy event came off'.

On 31 May 1889, a more detailed account of the encounter was published in the Liverpool Daily Post (and repeated in many other newspapers)

'How the late Mr. James Maybrick made the acquaintance of Miss Chandler (his future wife) has already been vaguely hinted at and described in various ways.  But the following is the authentic version of the incident, which is even more romantic than any of the previous accounts.  One day, about eight years ago, while on board a homeward-bound steamer from America, a lady stumbled in descending the companion-way leading to the dining saloon.  She would have fallen to the bottom but for the fact that Mr. James Maybrick was there and caught her in his arms. In doing so he sprained his ankle, and was laid up for some time...Later on, the then Miss Chantler (sic) (daughter of a Mobile banker) called on the gentleman who had saved her from an awkward accident; and subsequently, when she was staying at the Childwell Abbey Hotel with Major and Mrs Hazzard (of New Orleans), Mr Maybrick visited her. It was a case of pure love...'

It will be noted that the steamer on which the encounter occurred was not mentioned, and the event is dated to 'about eight years ago' from which someone might have thought it occurred in 1881, prior to the marriage of the couple in July of that year.

According to the Northern Daily Telegraph of 10 August 1889, the spraining of the Maybrick ankle led to Florence nursing James for the rest of the voyage.

'It was in crossing the Atlantic that Miss Chandler, as she was then called, stumbled on descending the companion ladder, and fell into the arms of her fellow passenger, Mr. Maybrick; her weight caused him to slip, with the result that he badly sprained his ankle, Miss Chandler assiduously nursed Mr Maybrick during the remainder of the voyage, an attachment sprang up, and soon after arriving in Liverpool they were made husband and wife.'

The above is basically all that later writers had to work from when telling the story in their accounts of the Maybrick case.  The story of Florence's first encounter with James is not mentioned in Macdougall 1891, Levy 1899 or Florence Maybrick's book from 1905.

However, it should be noted that The Northern Daily Telegraph version of the story was basically repeated in the Daily Mirror of 18 July 1904 and then again on 23 July 1904, with the Mirror stating that 'Florence met Chandler on the steamer Celtic', thus being the first to attempt to name the ship.

When it comes to published books, the story seems to have been first told in a book by Charles Boswell and Lewis Thompson in 'The Girl with the Scarlet Brand', 1954, p.8.  They wrote:

'In the spring of 1881, an eighteen-year-old American girl took passage aboard a steamer in New York, bound for Europe...A few weeks later, on July 27, 1881, Florence and Maybrick were married in London...'.

The authors didn't identify the steamer and, as we can see, they thought the encounter occurred a few weeks before the wedding, in the spring of 1881.

Nigel Morland made an attempt at identifying the steamer in 'This Friendless Lady', 1957 (pp.3-4).  Presumably relying on the Daily Mirror of 1904, he said it was 'the S.S. Celtic' and, like Boswell and Thompson, stated that the encounter occurred in the spring of 1881.  Debunking earlier press accounts, including that in the Daily Mirror, Morland (who appears to have thought that the story was that James had fallen into Florence's arms rather than vice versa) added a footnote saying that Florence did not meet James 'when he tumbled down a gangway into her arms, and was nursed by her until his sprained ankle was well'.  There was no tumbling, he said.

Richard Whittington-Egan, 'Tales of Liverpool', 1967 (p.52) also stated that the encounter occurred in 1881, prior to the marriage in July, but no ship was named.

It was Trevor L. Christie, 'Etched in Arsenic', 1969, p.36, who first said that the encounter was actually in March 1880 and occurred on 'the White Star Liner Baltic'.  He also mentioned the introduction being made in the bar of the ship by Confederate General J.G. Hazard of New Orleans, said to be an old friend of both Florence and Maybrick (and he pooh-pooh'd the story of Florence falling into James's arms, a story which he understood as being that Florence tripped on her evening gown and sprained her ankle). Introducing some brand new information, he said that, after the voyage, Florence went to Paris and stayed 'That autumn' with the Hazards near Liverpool, adding that, 'When he (James) returned to Norfolk and she to Paris it was agreed that they would be married the following spring if their feelings were the same' (p.38)

When Bernard Ryan told the story of the meeting in 'Poisoned Life' 1977 (p.15), he said it occurred in 1881 (hinting at May 1881) aboard 'the liner Britannic'.  He even had the captain of the Britannic raising a toast to the newly married couple.

The Celtic, the Baltic and the Britannic were all White Star liners which sailed across the Atlantic at the time (and the suspicion must be that Ryan simply guessed at the Britannic). But which was the correct ship on which Florence met James, if indeed they did meet on a ship?

'Florence Chandler was only eighteen in 1880 when, on a transatlantic crossing from New York to London, she met her future husband, James Maybrick'.

A 1990 publication entitled Murder Casebook, 1990, Marshall Cavendish Ltd, p.1445 said: 'They met one spring day in 1880 in the first class tea room of the White Star liner Baltic as she steamed away from New York harbour bound for Liverpool'.  (It also said the marriage was on 27 July 1880, with James Chandler born on 24 March 1881).

That was the only information available to Mike, or any other researcher in 1992.  As we know, Mike plumped for the Britannic in his "research notes" which means he simply must have consulted Ryan's 1977 book.  There is no other possible source.  Even if Ryan got it from somewhere else, his source must be so obscure that it couldn't possibly have been available to Mike.

Subsequently, having evidently looked more closely at the matter, Shirley Harrison, in 'The Diary of Jack the Ripper' 1993, p. 27 wrote:

'On March 12th [1880], the Baltic in the command of Captain Henry Parsell, steamed from New York.  Among the 220 first class passengers was the impulsive...Florence Chandler'.

Captain Henry Parsell was indeed the captain of the White Star Line steamer Baltic in 1880, so Shirley had obviously done a bit of research into that, but she didn't claim that Parsell raised a toast to the couple, something which seems to have been in an invention of Ryan.  The Baltic was certainly scheduled to depart from New York for Liverpool on 12 March 1880 although, according to the Times of 13 March 1880, it actually left New York at 6.30pm on 11 March with a total of 75 passengers (not 220 first class passengers as Shirley believed).

Paul Feldman in 'The Final Chapter' 1997, p.69, followed Shirley by saying: 'James fell in love with Florence Chandler when they met aboard the SS Baltic, travelling first-class from New York to Liverpool in March 1880'.

So what is the truth of the matter?  What was the steamer on which James and Florence sailed from New York to England?  In which year did it occur?

James did make the voyage across the Atlantic from New York in 1881 but it was on board the White Star Line Steamer, the Adriatic, in February 1881.  Departing New York on 30 January 1881 it arrived at Liverpool on 8 February. This is the (first class) passenger list. 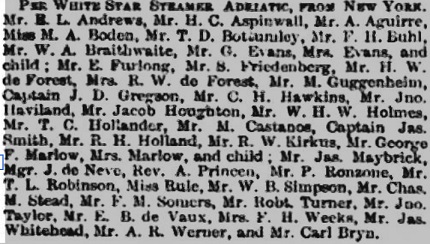 We can see that James Maybrick was one of the arrivals. But Florence was not on board.

There is a surviving letter, incidentally, written by Maybrick on 'R.M.S. Baltic' headed notepaper, dated 4 March 1881 (the 'R.M.S. standing for Royal Mail Steamer). But Maybrick was not on the Baltic at that time! The Baltic departed Liverpool for New  York on 1 March 1881 and arrived in New York on 11 March.  Maybrick was not on the passenger manifest when the steamer reached New York.  When writing the letter, therefore, he must have used the ship's stationery from a previous voyage.  He was not 'aboard the SS Baltic in March 1881' as stated on page 261 of Inside Story, citing Feldman.

In fact, assuming the couple hadn't already met in New York, the steamer on which the first encounter between Florence and James occurred must have been the Baltic which left New York on 11 March 1880.  For we find that James and Florence (and the Baroness Von Roques and General Hazard) were recorded in the Liverpool Daily Post of 23 March 1880 as having been on that steamer when it arrived at Liverpool on 22 March.  Here is the full list of (first class) arrivals on the Baltic: 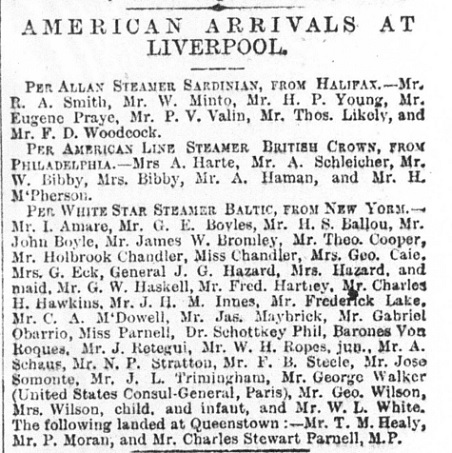 The eagle-eyed among you will already also have noticed another famous name.  Yes, Charles Parnell was also on board the Baltic when it departed New York!  He had come from Montreal to New York, while on a tour of Canada, having been telegrammed from Ireland to return urgently: a general election having been called in the UK for April.

So what we can clearly see from all this is that when it comes to 1992, to the very best of my knowledge, Ryan's book is the only source for the factually incorrect claim that James and Florence met on the Britannic and, indeed, the only two known documents in existence during 1992 which stated this fact are Ryan's book and Mike Barrett's research notes!