Simon Wood If He Could

For Wood, such errors of recollection can only mean one thing: someone is telling lies!

Yet, the same standards don't seem to apply to Wood himself with his own recollections.  We've already seen in Re-Reconstructing Jack how Wood has given inconsistent accounts of his one meeting with Stephen Knight - Knight happily agreeing with Wood's criticisms of his book in one version and arguing with him about those same criticisms in another - while the meeting in one version occurred 'a year or two' after 1976 but 'a  few years' after 1976 in another version.  For Wood, that type of discrepancy would normally be enough to conclude that such a meeting never occurred but, like I say, different standards apply when it comes to him.

Another example of Wood's failure of recollection relates to his supposed identification of initials on the wall of Mary Jane Kelly's room, as 'seen' in the police photograph of the scene of her death.  Posting on the Censorship Forum in October 2012, he was clear that he first mentioned seeing those initials in 1988.  Hence in the thread, 'Upon reading the diary again' he posted on 9 October 2012:

'When I read all the arrant nonsense the diary has generated I wish that in 1988 I had kept my mouth shut and not mentioned the possibility of there being initials visible on the wall in the MJK photograph.'

He repeated the same claim a few posts later in the same thread:

'Yes, in 1988 I was the first person to voice the possibility of there being blood-stained initials on the wall in the photograph of Room 13.'

It certainly wasn't the first time he had said this.  Back in September 2008 he told Major Tom:

'Yes I am the person who in 1988 first commented on the letters on the wall'.

The problem is that it's not true.  Simon first voiced the possibility of there being blood stained initials on the wall in the photograph of Room 13 on 1 April 1989 at a Jack the Ripper Seminar hosted by Martin Fido the The City Darts pub in Commercial Street. 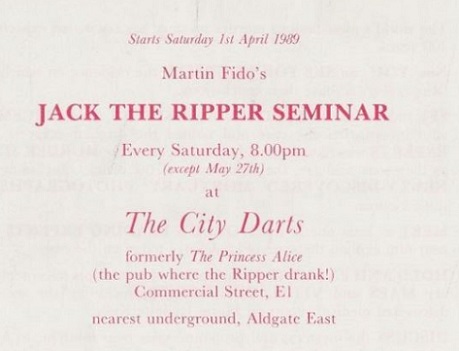 It was, in fact, to Martin Fido that Simon mentioned in April 1989 the possibility that the killer might have written some letters on the wall in blood.  But he didn't say that those initials were "FM" and it's not even clear precisely where on the wall he saw the initials.  I'll come on to that but why did Simon say that the incident happened in 1988?  Well it's possible that he was confused by the fact that he had met Martin Fido at a meeting to 'celebrate' 100 years of Ripperology (although really 100 years since the Kelly murder) on 9 November 1988 in the private bar of the Golden Hart pub in Commercial Street.  But, if we take Simon Wood's own approach to these matters, he was obviously lying and never spotted the initials at all!

Well, fortunately, Lord Orsam does not take the Simon Wood approach to witness recollection and Wood was obviously just confusing the dates, especially as Shirley Harrison had said in her 1993 book that Wood had first mentioned the initials to one of her consultants in 1988, so he followed that (although on a couple of occasions, bizarrely, he did correctly say it was 1989).

'No, we did not determine the initials as 'F' and M.

You can also see the usual Simon Wood nonsense when he says that he has a feeling that 'the diary would never had happened had it not been for my observation'.  What can he possibly mean by that?  Does he think Martin Fido tipped off the forgers about some initials on the wall which led them to think about forging a diary of Jack the Ripper?  Honestly, what is wrong with that guy's mental processes?  That clearly never happened.

But we can see that he somehow believes that he was responsible for the diary.  Hence, as we saw above, he said 'Who'da guessed it would lead to all these shenanigans'?  But his supposed spotting of some initials led to precisely nothing.  There was obviously no connection between him imagining some unspecified initials on the wall and the vague entry in the diary about initials here and there.

Perhaps he just wanted to big up his role in all this.  He wasn't the first to spot 'the initials' on the wall at all.  He simply suggested to Martin Fido that there might be some initials there.

All that then happened is that when the diary was being investigated in 1992, Martin Fido mentioned to Shirley Harrison that Simon Wood had once theorized that there might be some initials on the wall which could explain the diary's vague mention of 'an initial here an initial there' (which may or may not have been a reference to initials on the wall but, if the forger had noticed something on the wall, this could quite easily have been spotted independently of anything Wood had seen or mentioned).  Fido had, in fact, by 1992, spotted that there was something which looked like an 'M' on the wall.  Here is how he told the story in a post in May 2001 (with some typos corrected):

'I have to say I doubt whether the forger had any awareness of the supposed initials on the wall at all. They were first pointed out to me before the emergence of the diary by Simon Wood, who saw completely different letters and thought a completely different name was being started. (I don't say what, in case Simon ever wishes to publish). In the earlyish days of my acting as 'advisor' to Shirley, I mentioned Simon's observation to her, since I knew that 'an initial here an initial there' and such things were proving puzzling. I also remarked that I couldn't myself detect the letters Simon saw (which may have been in a different position) but I did think I could see an M and an E. Before long the E was an F....'

So we can see that Fido had thought that the other letter might be an 'E'.   It was presumably only considered to be an 'F' after the appearance of the diary when it was suggested that Maybrick might, for some strange reason, have been writing his wife's initials on the wall.

What about Wood himself?  His theory was that Kelly might have tried to write her killer's name or initials on the wall.  As he told Nick Warren in a letter to Ripperana dated 10 November 2005, he thinks that Keith Skinner and possibly Paul Begg joined Fido in guessing what was on the wall and:

'My discovery was pounced on with enthusiasm, but try as we might none of us could decipher the initials let alone fit them to a suspect.'

However, I can reveal (possibly for the first time) that Wood believed that any initials on the wall might have had something to do with Joseph Barnett.  That was what Fido was holding back in his internet post of May 2001.

The reason for this is not only because he was the first to implant into Martin Fido's mind that there might be initials on the wall of Kelly's room.  It was because, in November 1992, before the diary was public knowledge, Edmund McCoy published a fiction novel entitled 'Blood of the Fathers', the plot of which involved a diary from 1888 being discovered which revealed the truth behind the killing of Mary Jane Kelly.

But why did this point the finger at Wood?  Well Wood had been known to have been a drinking buddy of Edmund McCoy during the late 1980s!  McCoy apparently had an idea for a Ripper book which linked the Whitechapel murders to the Fenians, something which seems to have interested Wood (and, to be honest, it would not surprise me if most of Wood's ideas about Jack the Ripper came from a writer of fiction!).

Here, for the first time, is the text of a previously unpublished letter written by Martin Fido to Nick Warren dated 8 March 1994 in which he discussed the possibility of Simon being the evil genius forger behind the diary:

'I gather from Keith that the full genesis of the McCoy book is familiar to Paul Begg, who met him at one of the old Jack the Ripper seminars in the City Darts (where McCoy also met Simon Wood and the three went drinking together).  McCoy was already mapping out the possibility of a Ripper book, linking the Fenians with the murders, and kept in touch with Simon for guidance in this scheme.  Paul has owned the book since it came out, but never bothered to read it!

I agree with you that it seems yet another really unacceptable “coincidence” that the first ever Ripper novel to turn on a confession going through publishers under conditions of darkest secrecy should appear just as such a thing happens in real life.   If the dates would only fit.  I should simply assume that Simon Wood told McCoy about the ongoing journal saga.  But it seems that they can’t, as the first Keith Skinner heard of the journal was June 1992, prior to which it was well below the horizon. The structure of the book makes clear that the publishing aspect was intended from a very early stage.

Even so, knowing Simon, I can’t see him as a  forger or hoaxer.  He would have to be very deep-laid in planting the initials clue, for example: merely telling me he can deduce letters on the wall which he thinks would make the name “Barnett” at some date at least two or three years before the appearance of the novel.  He has to trust me to spot the alternative M and (if you can see it) F; remember them; and bring them up at the time when the journal appears.  He has amazing luck that I remember the principle and pass it on while Shirley Harrison is in the research stage: perhaps with very bad luck I insist on his being accredited with the original observation instead of letting it slide into an unattributed “we found that…” which has happened to so many of the genuine discoveries about Maybrick made by Keith  Skinner.'

So, while Fido ultimately rejected the idea, it is highly amusing that he appears to have been seriously discussing with Warren the possibility that Wood was behind the whole Maybrick diary. My own view is that there would have been far more mistakes in the diary if Wood has been responsible for writing it!

For me, however, the most interesting thing to emerge is that Paul Begg appears to have been an old drinking buddy of Simon Wood.  Does this explain why Begg hardly ever seems to challenge the nonsense that Simon Wood writes on the forums?  Paul Begg the great seeker of truth who is both fearless and relentless against Hallie Rubenhold and Trevor Marriott, to name but two, seems to be quite silent when it comes to Simon Wood.  I never could quite understand it while I was posting on the Forum but this information puts things in a rather different light.

Anne and Keith.  Simon and Paul.  Caroline and Jonathan. These friendships in the world of Ripperology really are a great thing aren't they?