In the early hours of Friday, 2 July 1909, Kate "Kitty" Roman, aged 24, was found murdered in her room at 12 Miller's Court, only yards from where Mary Jane Kelly had been murdered in November 1888.

Miller's Court was a notorious area for prostitution.

Mary Jane Kelly was a prostitute.

'She left home eight years ago and followed her trade as a laundry hand.  She had the character in the neighbourhood of being a quiet, inoffensive girl, not the least addicted to drink.  And was reputed to have sold flowers in the day time near Aldgate station.'

That's a great start for our investigation.  I'm already doubting that she was a prostitute.  She was clearly a laundry hand and flower seller.

Let's now look at the inquest evidence.  Here we don't need to rely on the newspaper reports because the depositions have survived (TNA: CRIM 1/115/1).

So we've solved it!  She was a domestic servant.  We can all go home.  The lady's reputation is restored.

And it gets better.  Andrew Stevens, the rateable owner of the property, testified that Kitty paid the rent of five shillings a week regularly and that a man called Henry Benstead was 'regularly living with her'.

So the picture is looking good.  She was a domestic servant, occasional laundry hand and flower seller who lived with her boyfriend, Henry.  She paid the rent regularly.  Why are we even asking the question?

'I reside at 31 Quaker Street, Spitalfields E. I am 20 years of age.  An unfortunate.  A flower seller'.

What about Henry Benstead? Surely he will clear this matter up. He gave his occupation as a newsvendor.  It all sounds very respectable. He told the coroner this:

'I have known Kitty Roman for the past four months. I first knew her owing to the fact that she was a friend to a girl named Lily Cook, whom I was living with then.'

Now the next sentence is a bit dubious and might start to get us worried.  For he said:

'As far as I can remember I met Kitty on the Wednesday before Easter Monday, May 26th, 1909, in Commercial Street.  We had a conversation, and I went home to her address No. 12 Miller's Court, where she occupied a furnished room.  I stayed with her that night, and have been living there ever since.'

I don't like your suspicious minds.  A girl can meet a man in the street, can't she?  And she can take him home after a conversation, can't she? It doesn't mean she was selling herself, does it?

That's got to be good enough.

Benstead also said he occasionally assisted Kitty in paying the rent.  It sounds like a loving relationship.

At the magistrate's court, for which the depositions also survive, Benstead said on 20 July:

'I went out and helped to support her, she did not walk the streets to get money by it as far as I am aware of.'

So, finally, we have a beautiful quote that, 'she did not walk the streets to get money'.

Benstead also said this about Kitty:

'She was an unfortunate and I believe that she occasionally went out soliciting prostitution but I have never seen her, and it was not with my consent.'

We should consider this statement very carefully because it shows how, despite living with a man, a woman could still engage in prostitution.

And how many men would have been happy to say in court that their partner was engaging in prostitution almost behind their back?  Surely most men in that situation would simply have said that they weren't aware of any such thing happening.

'I knew the deceased woman as "Kitty," and remember seeing her standing outside the Britannia Beer House, Commercial Street, corner of Duval Street, almost 10.30pm on the 1st inst.  She was standing alone...I have seen the deceased woman accompany men up Miller's Court, and it was a practice of hers to stand outside the Britannia nightly up till about closing time, and she would also walk the other side of Commercial Street, close to Spitalfields Church...'

Tragically, Kitty was murdered by one of her clients while she attempted to earn her rent which was payable later that very day, Friday, 2 July (just as Mary Jane Kelly's rent was due on Friday, 9 November 1888).  As of the Thursday evening, she was broke. Benstead had given her one shilling for food but she replied, 'what about the rent?'.  According to the confession of the man who killed her, Harold Hall, Kitty had tried to steal some money from his jacket and, in a rage, he cut her throat.

At Hall's trial, a market porter called Alfred Wilkins confirmed that Kitty was a prostitute.  For more on Wilkins see George Hutchinson Reborn.  Detective-Inspector Wensley stated, 'The deceased was a prostitute and her friends are.  She mixed with all sorts of characters...' .

Kitty doesn't appear to have had any convictions for prostitution and, indeed, the police seemed to let her operate in peace. If she had worked away from the eyes of P.C. Burstead, and if Benstead hadn't admitted to her prostitution, would we have been able, if the killer also hadn't been caught (so that there would have been no further court proceedings after the inquest) to say with any certainty that she was a prostitute?

Anyway, we've established that she was a prostitute. So, per Rubenhold, it only needs us to take a quick look at the death certificate for the inevitable confirmation of this and we can wrap the whole case up and go home.

That's not a prostitute.

But, but, but... we've seen the clear evidence that she was a prostitute from her partner, from a local resident and from a police constable who regularly saw her soliciting.

Yet, by the Rubenhold rules, she can't have been a prostitute if she wasn't stated to have been one on her death certificate.

Even worse, although the inquest was managed by Wynne Baxter's deputy, James Godding, it was very much under the authority of Wynne Baxter as can be seen from the below: 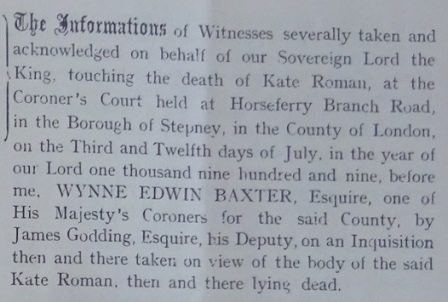 So we have an inquest of an undisputed prostitute in Wynne Baxter's Coroner's Court more than twenty years after the Ripper murders for which he conducted the majority of the inquests and still such a woman is NOT being described on her death certificate as a prostitute.

Does that tell us anything, do you think, Hallie Rubenhold?