News of the Ooze

The evidence of Police Constable Neil was that, on examining the dead body of Mary Ann Nichols with a lamp at about 3.45am on the morning of 31 August 1888, he saw 'blood oozing from a wound in the throat'.

The fact that blood was still 'oozing' suggests that Nichols had been murdered recently.  But how recently?  For how long after death can blood ooze from a wound?

This question has been debated long and hard on the Forums, with some saying that it can't be much more than 7 minutes, while others say it can be a lot longer than that. Various experts have been cited but the debate has been inconclusive.  Naturally, if we can pin down a maximum time for oozing it will allow us to fix the earliest possible time of death of Nichols.

Although the question has been unanswered on the forums, I can now exclusively reveal that oozing can continue for at least 30 minutes after death and that this is solid fact.

Here is the evidence.

Lydia Green of 8 Baches Street, Shoreditch, was murdered at about 7.15am on the morning of Saturday 5 February 1887.  We can fix the time because her mother, Mrs Ann Green, who lived in a room above Lydia in the same house, said in her deposition at the inquest on 8 February 1887 (CRIM 1/125/8):

'About 7.10 or 7.15 am on Saturday the 5th inst. I heard a very heavy noise as if something had fallen down, but I did not know where the noise came from.'

She said she got out of bed and got dressed and, while doing so, she heard someone walk sharply along the passage on the ground floor and shut the street door with a bang.  Lydia's boyfriend Thomas Currell, was seen by a witness (George Williamson) in Baches Street at about 7.18 that morning.

Mrs Green's daughter always used to knock on the ceiling of her room with a pole at 7.15 in the morning as a sign to her mother that it was time to get out of bed but it didn't happen that morning. So that allows us to fix the time of death at no later than 7.15.  At 7.30, after dressing, Mrs Green went down to her daughter's room and found her almost fully dressed but dead.  It would later transpire that she had been shot three times in the head and neck with a pin-fire revolver.

Evidence was also given by Lydia's sister, Amy, who also lived in the same house.  She said:

'On Saturday, 5th of February, about 7.15am, I was in bed in the same room with my mother.  It was the first floor back room.  I was aroused by a most unusual noise, which I cannot describe. I heard it three times.  I sat up in bed and said, "Mother, what is that noise?"  She said, "I don't know".  I replied "I suppose someone has slammed the door.'"  My mother said, "No, I don't think so.  I shall get up and dress, and Lydia has not knocked.'

After hearing her mother crying for help from downstairs, she went down and found her sister dead.

'I saw the body of the deceased.  It was lying on the floor with the head resting on her sister's knee.  I examined the body.  I found that life was extinct and the body warm.  In examination I found a depressed wound on the forehead over the left eye, from which blood was oozing, and there was a quantity of dried blood around the wound.'

So there we have it.  Blood 'was oozing' from a wound when Dr Davies carried out his examination at about 7.45am. 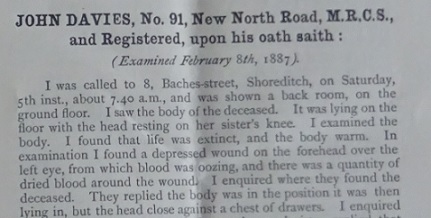 He repeated this evidence at Worship Street police court on 23 February.  His deposition records him as saying 'Blood was oozing from those wounds.'

There is clear evidence, as we have seen, that the murder occurred at around, and no later than, 7.15am.  Both Mrs Green and her daughter heard strange loud bangs at that time, and Lydia's murderer was seen in the street a few minutes later, after Mrs Green had heard the house door bang.  At the Old Bailey trial, the Divisional Surgeon, Peter Burchell, stated that 'the injury to the brain and the shock would cause instantaneous death.' So Lydia must have died immediately.   At the Old Bailey trial, Mrs Green slightly modified her evidence by saying that she heard the three loud noises at about five or ten minutes past seven but, if we take 7.15 as the time the fatal shot was fired, it means that the blood was oozing from fifteen minutes past seven to quarter to eight, a period of 30 minutes.

And who was the coroner to whom Dr Davies deposed that he saw blood oozing when he first saw the body that morning?  None other than Wynne Baxter!  So when PC Neil said in his evidence to the same coroner that he saw blood oozing from the body of Mary Ann Nichols at 3.45am it probably wouldn't have surprised Baxter to have learnt that the murder of Nichols could have occurred as early as 3.15am.