Ultimately this is an article which will provide support to my Bunny's Aunt article about the mistake in the diary when the author referred to Florence's sick aunt as being the reason for her trip to London in March 1889.

First, though, have you ever wondered as I have, how evening newspapers in the nineteenth century were able to print reports of court proceedings which had occurred earlier on the same day, especially those which had not yet concluded?

How did the court reporters get their copy to the newspaper office? Did they have to leave the proceedings midway through in order to take their notes to their editors?

Well, there's a revealing insight in the Liverpool Echo of 8 June 1889 that I discovered recently about how it managed to get its reports of the inquest into the death of James Maybrick published in the newspaper on the same day.  We are told: 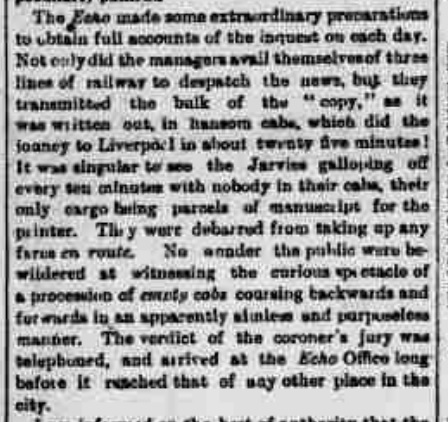 'The Echo made some extraordinary preparations to obtain full accounts of the inquest on each day. Not only did the managers avail themselves of three  lines of railway to despatch the news, but they transmitted the bulk of the "copy" as it was written out, in hansom cabs, which did the journey to Liverpool in about twenty five minutes!  It was singular to see the Jarvies galloping off every ten minutes with nobody in their cabs, their only cargo being parcels of manuscript for the printer. They were debarred from taking up any fares en route. No wonder the public were bewildered at witnessing the curious spectacle of a procession of empty cabs coursing backwards and forwards in an apparently aimless and purposeless manner.  The verdict of the coroner's jury was telephoned, and arrived at the Echo office long before it reached that of any other place in the city.'

The "Jarvies", as you might have guessed, were cab drivers.

Was something similar occurring every day outside the coroner's courts during the inquests into the Whitechapel murders?  Maybe.

I'm also guessing that court reporters had assistants or made use of young boys to run their manuscripts from the court room to the cabs.

Also very interesting is this snippet from the Liverpool Daily Post of 31 May 1889 regarding the acoustics at the inquest into Maybrick's death: 'What has become known to the local public as "the Aigburth Mystery" reached a more crucial stage yesterday, when the police unfolded the first part of their budget of evidence before Mr. Coroner Brighouse.  It had been arranged that the largest public room which Garston can boast of should be placed at the disposal of the authorities, and the old police court situated in Wellington-road was accordingly hired for the purpose. It was certainly roomy enough to accommodate the elaborate array of lawyers, reporters, witnesses, and spectators who attended, but from an acoustic point of view it was about as bad a building as could have been selected. The Pressmen experienced the utmost difficulty in hearing, and for twelve mortal hours over which the proceedings extended many of them had to take notes in all sorts of positions - standing up between serried ranks of policemen; on their knees, sometimes on the backs of learned counsel; and in various other awkward postures, for it was found impossible to hear at the tables assigned to them'.

If anyone wonders why sometimes there are inaccuracies in press reports of inquests, there's your answer right there!

But acoustics is only one part of the problem.  There are also witnesses who don't speak clearly. Look at this report from the Echo of 1 August 1889 about the Maybrick trial: 'The calling of the name "Alice Yapp," by Mr. Addison, created a murmur of excitement in court. This young nurse, who was in the Maybrick household, and who distinguished herself by opening her mistress's letter to Mr. Brierley, is a good-looking girl of about two and twenty, with a painfully diffident manner - somewhat in contrast with her demeanour at the inquest, when the whole affair seemed to be treated in a light-hearted and somewhat frivolous humour.   She was dressed in sober black with a high black hat with ribbon trimmings, and a bunch of pink flowers.  Counsel experienced the utmost difficulty in getting this retiring and excessively shy young person to speak loud enough to be heard.  Mr Addison twice lost his patience, and said, "Please do speak up.  I can't hear a word you say," whereupon Miss Yapp smiled as if it was a rather good joke to give evidence in a tremulous whisper. Mr. Shuttleworth cast beseeching glances at her, and encouraged her with flourishes  of his gigantic quill pen and after these blandishments Miss Yapp murmured a trifle more audibly, and proceeded to relate what happened in the Maybrick menage after the Grand National.'

Those who closely followed the debate over 'Bunny's Aunt', and read all my articles on the subject, will understand why this is so important.

At the start of her evidence at the trial on 1 August 1889, Alice Yapp was reported as saying that she understood, prior to her departure, that Florence was going to London in March 1889 to see 'her mother'. It was immediately after this part of her evidence that the prosecution Counsel told her, 'Do try and keep up your voice.  You give us a great deal of trouble'. From this point she evidently started to speak more loudly and audibly, because the Liverpool  Echo and other newspapers recorded her evidence in transcript form, with the full questions and answers provided. Hence, by way of example: But, as can be seen, the earlier part of her evidence was given in summary form only.

Now that we know for a fact that Yapp was speaking softly at the commencement of her evidence and creating great difficulty not only for the press but for the barristers in hearing her (and probably the judge too because he didn't record her answer about Florence's 'mother' in his notes), we can surely conclude with a high degree of certainty that Yapp actually testified that Florence had said she was going to London to visit her godmother, not her mother.  It's just that the reporter or reporters who heard her say 'mother' (of which it would appear that there no more than two who heard and reported this: one from the Liverpool Echo/Post and one from the Liverpool Courier)  were mistaken.

This is exactly what I said in Lord Orsam Responds Part 3 on 19 September 2020 (when I stated that 'mother' was 'a clear transcription/hearing error') and again in The Facts of Iconoclast on the same date (when I said that Alice Yapp 'must have been misheard') and again in Bunny's Friend Redux on 16 January 2021 (when I said that it was 'an obvious mishearing (probably by newspaper reporters) for godmother').   This was before I had any clue that Alice Yapp had spoken so softly when giving her evidence at that very point during her questioning that she was admonished by Counsel for it.

We know for a fact from the evidence of Dr Hopper that Florence's cover story for going to London was to visit her godmother, the Countess de Gabriac, who was supposed to be in London to visit a medical man, so that it wouldn't have made any sense for her to have told Alice Yapp that she was going to visit her mother (who was, of course, living in Paris at that time).

If it is accepted - as it must be - that Yapp said 'godmother', the only possible and sensible conclusion that can be drawn from this is that there is no way on earth that James Maybrick, the head of the household, would have been under the impression that Florence was going to London to see her aunt while at least one of the servants knew perfectly well that the story was that she was going to see her godmother, as subsequently confirmed by Dr Hopper.  And, equally, we now know from both Yapp and Hopper that the Countess de Gabriac was not referred to inaccurately by Florence as her aunt, but correctly as her godmother.

If anyone had been any doubt until now (which they should not have been), this has to be the final nail in the coffin of the anachronistic and error-strewn diary, now exposed to even the most sceptical doubter as a shabby fake.