Little Scottie Nelson Esq. was, without doubt, one of the worst posters while I was a member of the Forum.

In the Maybrick threads, he would pop up with one-line posts pointlessly telling us without any explanation that the nineteenth century journalist Harry Dam was the author of the Maybrick diary although, as now also tells us that it's a modern forgery by Tony Devereux, the whole thing is a bizarre inexplicable mess of a theory.

The only other thing I remember him posting in the Maybrick threads was pointless questions about the meaning of a 'diary defender' or short posts showing that he'd misunderstood the subject under discussion.

Otherwise, I can only really think of him asking authors for complimentary copies of their books.

What he ever actually contributed to any of the threads escapes me.

Anyway, the reason I'm discussing him now is because he was responsible for my very last post on the Censorship Forum.

I had stopped posting completely at the end of May 2018 as I waited for the promised communication from Admin which never came, but then, in June, I happened to read one of the little fella's posts which was so daft that I felt I needed to respond.  It was to be my last ever post on the Forum.

What  happened is that on 8 June 2018, in his thread  'Mary Kellys Inquest', Trevor Marriott posted in the OP a copy of the Inquisition in the Kelly Inquest taken from Evans & Skinner's 'The Ultimate Jack the Ripper Sourcebook': Joshua Rogan (in #6) asked what the asterisks were next to the names of the Coroner and the jurors.  Debra Arif replied (in #10) that she wondered if they were meant to represent the little crown stamps used in the hand written versions.  Little Scottie Nelson Esq., however, having noted that there is no asterisk next to the name of Henry Dawkes, posted (in #11):

'Dawkes couldn't write and signed his name with an "X"'.

This was nonsense and, although I had decided to stop posting on the Forum until my issue with Admin was resolved, I nevertheless felt I should respond.  To Debra on 8 June (in #13) I wrote 'Correct' and to Little Scottie I wrote 'Incorrect'. 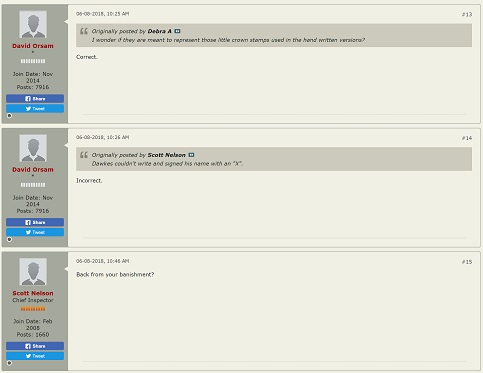 Rather than show any interest in why I was saying he was wrong, Little Scottie was more interested in making a snarky comment in response, hence:

'Back from your banishment? '

He just keeps getting it wrong!  Of course, I hadn't been banished at all but had simply decided to stop posting for the moment on the Forum.  However, I was never to make another post before I resigned my membership of the Forum in August of that year.
But Little Scottie was still at it with the nonsense, posting in #31 a few days later:

We can see that the truth of the matter is that Henry Dawkes signed his own name on the original copy of the Inquisition: As can be seen, the reason why Dawkes' name doesn't have a crown seal is simply because there weren't enough of them on the pre-printed form to accommodate more than 13 jurors.
It really didn't need Little Scottie Nelson's nonsense which could easily have confused serious researchers reading the thread.
LORD ORSAM
20 November 2021