What if I told you that someone in Liverpool with the same surname as the owner of Battlecrease (Dodd) was making enquiries in the latter part of March 1992 about an antique silver colour biscuit tin they owned which was large enough to fit both the diary and the watch?  What if I also told you that a valuation for this biscuit tin was provided to this person by none other than the manager of the auction house Outhwaite & Litherland?

Sure, I know exactly what you'll say.  'Lord Orsam', you'll say, 'you are utterly insane'.  And, 'You've really lost it this time, Lord Orsam'.

Even if you think I might be right, you'll tell me I'll never be able to prove it.

Well, you're in for a surprise. Check this out from the Liverpool Echo of 31 March 1992 from their regular feature, 'The A Team...You Ask...We Answer': You can see here that a D.G. Dodd of High Bebington was asking about the history of a biscuit tin in his or her possession, the size of which was 12 inches by 9 inches by 2.5 inches (sufficiently large to have encompassed the diary measuring 11.5 by 8.5 inches).  We can also see that Bill McMahon, the manager of Outhwaite & Litherland valued it at about £45 to £50.

Sadly for those diary defenders who might have been excited that THIS was the biscuit tin in which James Maybrick placed the diary, we can see that McMahon dated the tin to between 1900 and 1949, although my searches on the internet suggest that it was, in fact, an item made in the 1950s by N.V. Biscuitfabriek Victoria of Dordrecht, Holland.

A few more images from the internet of what appears to be the same make of 1950s biscuit tin: 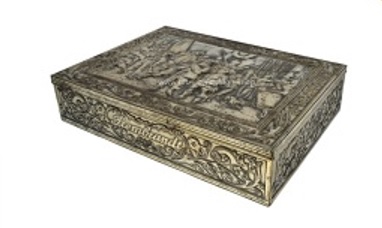 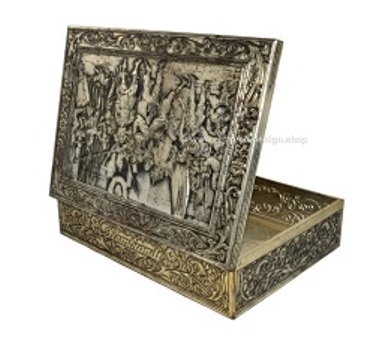 Remember how Miss Information suggested that Mike was changing his story because Maurice Chittenden reported in the Sunday Times of 3 July 1994 that Mike found the diary at a house sale?  And remember when my response was that an auction could encompass a house sale?  Well here is the proof from the Liverpool Echo of 6 December 1991:

So here we have an actual house sale being conducted by Outhwaite & Litherland in December 1991.  As the newspaper reported of the next O&L auction, 'Most items to be sold come from a house in Mossley Hill.  When the owner died, his relatives decided to have a big clear-out.'

I'm sure everyone will remember when Miss Information breathlessly reported some new information (or rather misinformation) she'd obtained from an anonymous source, who turned out to be the elderly Mr Litherland, about the value of photograph albums containing First World War photographs.  By way of reminder, she said (#506 of the 'Problem of Logic' thread, a post which inspired my article Inside Story of Post 506):

'I have recently been reliably informed that while an album and compass, such as Mike described, could have been sold together as a lot, they would have been itemised and described individually in the 'relevant' catalogue...I'm told this is because the alleged album of WW1 photos alone would have  been worth in excess of £100 back then.'

It will be no surprise to anyone that Miss Information's reliable source, was spouting utter bullshit.

Remarkably, it's possible to establish what valuation Outhwaite & Litherland gave to a photograph album containing WW1 photographs in 1993. This is from the Liverpool Echo of 10 December 1993. As we can see.  H.C. from Upton was asking about 'a photograph album of pictures taken during the First World War in and around Egypt'.  Far from being told that such an album was worth in excess of £100, Bill McMahon, the manager of Outhwaite & Litherland, was quoting a price of between £20 and £30 because 'there is so much similar material available'.  Miss Information was sold a pup by her source.

But it's all far worse than a simple dispute over valuation.  For Miss Information's big point was that the rarity and high value of the WW1 photograph album meant that it wouldn't even have been available for general sale at an O&L auction!  Hence, in #5236 of the Incontrovertible thread, she told us that the photograph album 'would not have been shoved in with a lot of miscellaneous items of little worth' so that:

'A collection of WW1 photographs that Bongo [Mike Barrett] had described, would almost certainly not have appeared in a general sale, but would have been included in a collectors' cavalcade sale, which was held about every two to three weeks.'

So, on the basis of the an album of WW1 photographs being rare and expensive, she was trying to bamboozle us into thinking that Mike couldn't have acquired one at a general O&L auction.

But now we know that this was nonsense on stilts.  We have the truth direct from the horse's mouth in a contemporaneous document that, in the early 1990s, photograph albums containing WW1 photographs were widely available and not expensive.

Everything I said on this subject back in June 2020 in Lord Orsam Says...Part 9 under the headings of 'The Secrets of Mr Litherland' and 'Drip, Drip', therefore, was correct.