There was a discussion on the Censorship Forum recently about a letter received by the Metropolitan Police on 19 February 1889.  Here is an image of the letter. 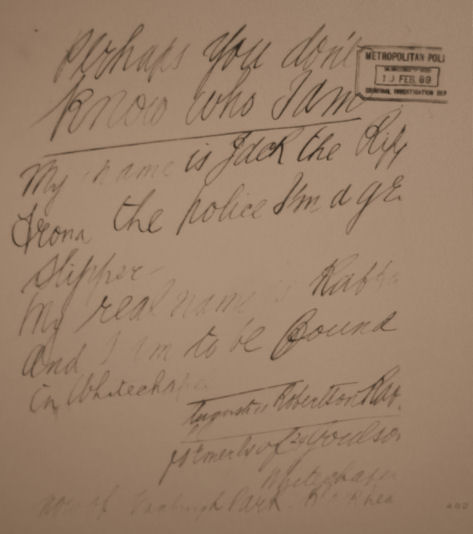 Some of the text on the right hand side has been cut off but the letter appears to say:

Perhaps you don't
know who I am

This has every appearance of someone making mischief and pretending to be "Augustus Robertson Raffal".

A likely identification was made of this man on the Forum as being the man who appeared in the 1881 census as 'August Raffel', a butcher born in Germany in about 1857, thus aged 24, and married to an America woman called Julia, both then living in Liverpool.  It would seem that this same man, now single, was visiting a house in Poplar during the 1891 census when he was described as a retired butcher aged 35, born in Mainz, Germany.  His name is written on the census as "August Riffel".

We then seem to find him again on the 1901 census living in Gosport: Augustus Rieffel described as a 'sausage skin manufacturer' aged 38 (although he would in reality, have been about 45) married to a young local woman, Annie, aged 23.  He was known to have died in the 1940s when his name was listed as 'August Lenard Rieffel'.

That's as far as he was traced in the thread but we can find further information about him from marriage and birth records, newspapers and from his divorce file at the National Archives.

From this we discover that his full name was Augustus  Leonard Rieffel.  He appears to have been engaged to marry Fanny Bailey in King's Lynn in March 1894, the banns having been read three times, but it seems that the marriage didn't go ahead.  He did marry Annie Ada Underwood in Alverstoke, Gosport, on 24 August 1896.  He gave his age (falsely) as 32 and said that he was a bachelor and a butcher living at 160 Clayhall Road, Gosport, and that his father was Adam Rieffel, a carpenter. The couple gave birth to Lena Victoria Rieffel in Q3 1897, to William Augustus Rieffel in Q3 1898 and to Sidney Ralf Rieffel in Q1 1901.

The fact that his father's name was 'Adam' is interesting because there appears to be a record of a marriage in Manhattan, USA, of an August L. Rieffel (transcribed on Ancestry as 'Kieffel' but on FamilySearch.org as 'Rieffel') to a C. Matilda E. Hill on 19 March 1886. The father of Rieffel is said to be Frederick Adam Rieffel, the mother being Theresia Franz.  If this is the same August Rieffel, it would appear to mean that he was purporting to be married to an American woman in 1881, that he did marry a different American woman in 1886, that he was engaged to marry a British woman in 1894 and then did marry a different British woman in 1896.

Then we have the following in chronological sequence.

"Auguste Reiffel, a skin dresser of Hardway, was summoned by George Webster for illegal dismissal..."

"Augustus Rieffel was...summoned by his wife Annie Ada Rieffel, who alleged persistent cruelty and applied for a separation and maintenance order.  The complainant said they were married at Alverston Parish Church in 1896, and there were three children. Before they had been married two months he was very cruel and smashed the bedroom windows. Four years ago he cut her head open with a cup and she had to go to Dr. Terry.  He knocked her down and struck and kicked her three months ago, and wanted a bit of string "to rope her up with".  After that he knocked her down with his fist and punched her, and while she was running to the police he threw two scrubbing brushes at her. On the 21st August he struck her with an iron rake, and was so violent that she went out on the quay as she was.  Her husband, when she returned, was pulling down the beds and putting them in the loft, and he told her that if she was a pig she could live like one.  She left him and has since been staying with Mrs Horsted.  Her husband had kept her short of money and he had made her eat almost anything.  The complainant admitted that five or six deeds of separation had been drawn up by solicitors, but she had returned to her husband.  The defence was a denial that there had been any assault, and Reiffel (sic) asserted that on the Sunday his wife left quite of her own accord.  He did nothing to frighten her away, and she could have returned had she wished.  His wife had a bad temper and often threw plates at him. His trade had completely fallen away by reason of opposition, but he admitted that he owned the property at Hardway, and had a banking account in Germany, though his local account was overdrawn.  The Court was occupied over three hours in the hearing of the case, and ultimately the Bench granted the separation order and directed the defendant to pay his wife 10s per week.  He also had to pay 31s costs."

Rieffel also accused Alfred Horstead of attacking him when he went to Horstead's house to see if his wife was there but Horstead said that Rieffel was the aggressor and the case against Horstead was dismissed.

"On Thursday 16th February 1911 at 12 noon, Quay Lane, Hardway, Gosport, Messrs Paine and Marsh are favoured with instructions from Mr Rieffel, upon leaving, to sell by public auction, on the premises, the live and dead stock, including useful cob, pony, harness, business carts, trolly, heiffers, sows and pigs,  steam engine, boilers, tanks, trap and harness, and usual husbandry implements together with an assemblage of Household Furniture."

"William Augustus Rieffel, 15, labourer" charged with forging a cheque.... said to be the son of "a German living at Hardway, Gosport".

Young William had defrauded his father.

"I was married to the defendant on the 24th August 1896 at Alverstoke Church and lived with defendant at Clayhall and Elson, Hardway, Germany, Bishops Waltham and Upham.  I last lived with him in January 1917.  My husband was a butcher and a sausage skin manufacturer... Defendant has a house in London, empty, except 1 room where he lives.  He is a man of means."

"At present I am living at Lee Villa, Brunet Road, Woodford Bridge..."

"Notice is hereby given that August Leonard Rieffel is applying to the Home Secretary for Naturalization..".

Death, Q2 1941 - Aged 85, thus meaning he was born in about 1856, consistent with the 1881 census record for August Raffel and confirming that his age given on his marriage certificate and in the 1901 census was incorrect.

IS HE THE BUTCHER OF WHITECHAPEL?

We can see that the supposed Jack the Ripper, formerly of 24 Goulston Street was identified as August Robertson Raffal.  He wasn't actually said in the letter to be a butcher. The different spelling of his surname isn't surprising but the different middle name (Robertson v. Leonard) is problematic. Although often calling himself "Augustus", including when he married, when he applied for naturalization he gave his name as "August".

We can see that this man was violent towards his wife.  If he actually lived at 24 Goulston Street at the time of the murders in 1888, which is rather hard to confirm, he could be a suspect for those murders.

Further research into this chap might uncover more information.