Following the murder of Kate Roman at 12 Miller's Court in July 1909, Police Constable Harry Woodley of 'H' Division, with the assistance of Detective Constable Stevens, surveyed and measured Miller's Court and prepared a plan (at a scale of a quarter of an inch to a foot) for the coroner's inquest.  That plan is held at the National Archives (CRIM 1/115/1). It appears to have been first discovered by researcher Mark Ripper and an extract from it was subsequently included in a 2011 book by M.W. Oldridge called 'Whitechapel and District'.  Not all of the plan was reproduced, however, and there is one interesting additional detail which we are going to discuss in this article.

Firstly, let's clear one thing up once and for all.   The room in which Kitty Roman was murdered was NOT located above Mary Jane Kelly's room.

Thus, the article entitled 'The Whitechapel Dossier: Dorset Street and Miller's Court' on Casebook which can be found here and which states: 'In No 20 Miller’s Court – the room directly above no. 13 and occupied by Elizabeth Prater in 1888 – a young woman named Kitty Ronan was found with her throat cut', is incorrect.  The author of this article appears to be confusing the murder of Kate Roman with the murder of Elizabeth Roberts in 1898.  Roberts was murdered outside Room 20 in 26 Dorset Street, which was a room above no. 13 Miller's Court.

What I want to focus on now is the door in Miller's Court which led to Elizabeth Prater's room on the first floor of 26 Dorset Street.  To be clear, I don't mean the door into Kelly's room but the door further up the alley towards Dorset Street. This door isn't mentioned in the evidence at the Kelly inquest but we know that, as Prater climbed the stairs to her room, she could see a glimmer of light through the partition into Kelly's room.  It seems that the front door of number 26 (where the front room was used as a shed to store barrows) was inaccessible so that residents needed to use this door in the alley.

Some of the artist sketches of 13 Miller's Court don't seem to show any kind of door in the Court other than the one leading to Kelly's room. Thus: Nor does this one: This one is more ambiguous: 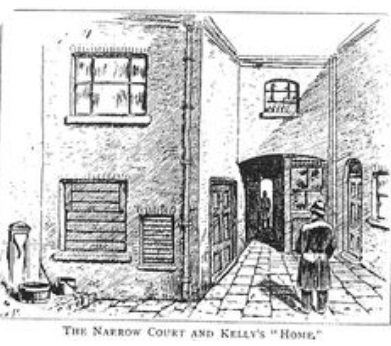 This one, however, certainly gives the impression of a door at the top of the alley: 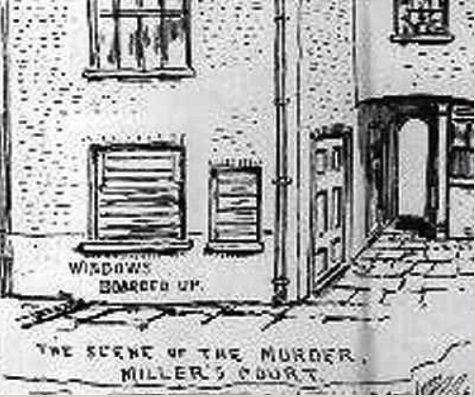 This is the same sketch, of better quality: That must be the door through which Prater went to her room.

A sketch from 1898 following the murder of Elizabeth Roberts in 26 Dorset Street shows the door even more clearly: The door actually featured in the evidence at the inquest into the death of Elizabeth Roberts (CRIM 1/54/6).  David Roberts, the husband of the victim, stated:

'I occupied No. 19 room.  It was on the first floor back. The approach to it is in Miller's Court and then up one flight of stairs and turn to the left.'

P.C. Fry who was called to the scene stated:

'I entered by a side door in Miller's Court, which was open. I went upstairs to the landing on the first floor.'

So there was definitely a door in Miller's Court giving access to the rooms on the first floor.   It would appear that this door is visible on the Goad map of Dorset Street from 1890 as below: I'll just circle it so you can see what I'm talking about: The notation "1ST" doesn't mean the first floor, it means the ground floor on Goad maps.

What we can clearly see is an opening into and out of Dorset Street to the passage or alley leading to Miller's Court.

Now this leads us to what I think is new information.  The door in question can be found on P.C. Woodley's 1909 plan but with an interesting description.  Here is the part of the plan which hasn't been published before (as far as I am aware): I'll just put it into a wider context for you: 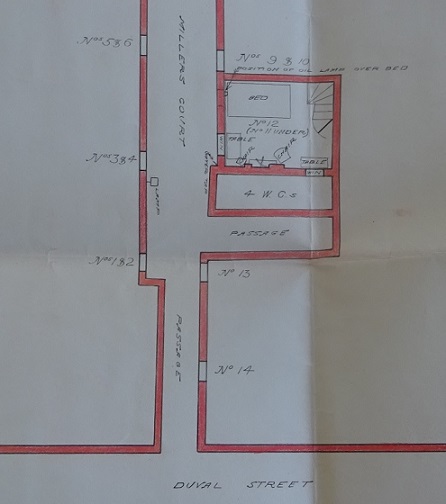 So it would seem that by 1909 there was a number 14 Miller's Court.  Did this mean that the door led into a room on the ground floor?  Was the front door to 26 Dorset (now Duval) Street in use at this time so that access to the upper floors was through that door?  Woodley's map doesn't show a front door but he was only concerned with Miller's Court so we can't draw any conclusion one way or the other.

Anyway, I can't take it any further but...welcome to 14 Miller's Court!